For help with this guide, please contact the Zhang Legacy Collections Center 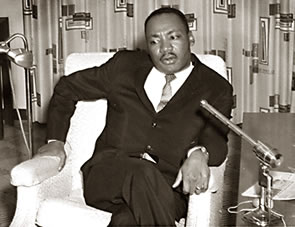 The speech transcription is important for several reasons. It adds to the body of knowledge about the development of Dr. King's work and ideas. Dr. King spoke at WMU just four months after he made his famous "I Have a Dream" speech. King's WMU address contains elements of earlier speeches and sermons, including his address at the Freedom Rally in 1957 and a sermon about loving enemies that he had given at the Dexter Avenue Baptist Church in Montgomery, Alabama. The speech transcription is also an important document for studying the continuing dialogue about racial prejudice and race relations on Western's campus.

The speech transcription and accompanying documents provide additional information to better understand Dr. King's enduring influence on Western's campus through the programs and curricula established in the late 1960s and the broader societal changes brought about by his nonviolent movement for civil rights and social justice for all.

The tape recording of the live broadcast of Dr. Martin Luther King Jr.'s December 18, 1963, speech was lost for almost 30 years. The tape was rebroadcast at the time of Dr. King's assassination in 1968 but was later lost until 1997 when Phill Novess contacted WMUK general manager, Garrard Macleod.

A copy of King's address had been found on a reel‐to‐reel machine that Novess had acquired from his grandfather, Phillip Novess. The senior Novess owned a small grocery store on the east side of Kalamazoo and accepted the reel‐to‐reel tape recorder as collateral for groceries in the early 1970s. When he sold the grocery store and the tape player had not been reclaimed, Novess took it home and put it in his basement. He gave the tape to his grandson for restoration purposes. Novess' business, Eclipse Media Group, specializes in noise reduction and restoration of audio tapes. Novess restored the tape with the assistance of Kevin Brown, of Brown & Brown Recording & Music Productions in Portage.

The reel to reel tapes, cassette copies, and digital copies on DVD  are held at the Zhang Legacy Collections Center.

Drawn from historical documents, including newspaper accounts, oral histories, yearbooks, and other sources in the Archives, the following information is an attempt to place Dr. Martin Luther King Jr.'s visit in the context of segregation, racism, and racial relations on Western's campus up to 1963. It is by no means an exhaustive account.

Western began constructing residence halls for students by the late 1930s. The rooms were limited in number and assignments segregated students by race, so many African‐American students continued to live in off‐campus rooming houses. According to several interviews, some male African‐American students had accommodations in the campus gym. There is no evidence that students questioned these policies, and that is not surprising, given the power administrators had over student behavior during this period. As future teachers, students were subject to a strict code of behavior that was monitored on and off‐campus at all times. Most students today are shocked to learn that female students during this era faced disciplinary action if they were caught not wearing their gloves while shopping downtown!

In the post‐World War II years, Western students began to consider the problem of racial prejudice in a direct manner. In 1947, the Western Michigan College Players performed "Deep Are the Roots." The play's story about a Black War hero returning to his home in the Deep South after having served his country with distinction had a strong message about the problem of racial prejudice. The Western Michigan College Players had several difficulties staging this production on the campus as it was the first non‐professional production by a racially mixed cast in the United States. About the same time, the campus radio station broadcast "A Study in Black and White" which was a drama about race relations.

By the 1950s, Western was part of the MAC conference and athletes regularly traveled outside the region for competition. One oral history recounting campus events from this period describes how the track team encountered racial prejudice on several occasions while traveling in the south to compete. Coaches and athletes took a stance against racial prejudice by refusing to patronize restaurants that would not allow the entire team to dine together. Ironically, the University segregated students living on campus in the 1950s by race and if a Black student and white student wanted to room together, they had to submit a written request as well as a letter of consent from each applicant's parents.

By the early 1960s, the issues of racism and race relations became a regular part of campus dialogue as evidenced by the growing number of lectures and performances. Lillian Smith, author of Strange Fruit, a celebrated banned book about an interracial love affair, was the leading speaker at WMU for the 1961 Religious Emphasis Week. Also appearing on the campus during this period for a performance and to discuss racism and race relations was activist and songwriter Guy Carawan.

Other campus‐sponsored events sought to bring students of different ethnic backgrounds together to address the issue of race relations. In 1962, the Alpha Interest Group, Campus Christian Fellowship, Council on Human Relations, Delta Sigma Theta, International Club, and Kappa Alpha Psi sponsored a retreat "Image of America" at Crystal Springs Camp in Dowagiac, Michigan to bring white, Black, and international students together to discuss national and international affairs, including racial relations.

A more controversial campus event was the September, 1963 appearance at Read Fieldhouse by pro‐ segregationist Mississippi Governor Ross Barnett. With the support of WMU President James Miller and State Superintendent of Public Instruction Lynn M. Bartlett, the Western senior class invited Barnett despite the strong reservations of Michigan Governor George Romney. Barnett's controversial address prompted a multitude of letters in the Herald for many days following his visit.

Dr. King's invitation to address Western Michigan University on December 18, 1963 as part of the "Conscience of America" lecture symposium was part of the continuing dialogue about racial prejudice and race relations. A distinguished theologian, author, and renowned leader in the civil rights movement, Dr. King was an obvious choice. After his 1963 visit, Dr. King continued to have a profound influence on the campus through the programs and curricula established in the late 1960s and the broader societal changes brought about by his nonviolent movement for civil rights and social justice for all.

After his visit in 1963, Dr. King continued to have a profound influence on the campus. Western Michigan University students reacted to King's assassination on April 4, 1968 in Memphis, Tennessee, and President James Miller responded to the students' demands to examine racism on the campus and in the University's curricula.

Within days of Dr. King's death, President Miller raised $28,000 to establish the Dr. Martin Luther King Jr. Fund. With additional support from the Kellogg Foundation, a program called "Project 73" was launched. Beginning in the fall semester, 1968, sixty WMU freshmen from southwestern Michigan high schools took part in this program which awarded scholarships and provided other assistance to students. This fund and program became the Martin Luther King Program. While the original program provided scholarship assistance, the current focus of the Martin Luther King Program is encouragement and support, including academic advising, vocational and personal counseling, tutoring, and testing.